The most needed values in our time…

All values matter. Of course. But I wonder if the importance of certain values rise and fall in given times and places? I can’t help but believe that certain periods of history would have turned out sustainably better if certain values had risen to prominence at just the right time. This seems to be some of the sentiment behind the notion that “the sons of Issachar” understood the times, and understood just what Israel should do, as articulated in I Chronicles 12:32.

As I seek to understand the times in which we live, I believe that there are three values we must, MUST, embody as Christ followers, if our testimony is to have any credibility at all. Here they are:

1. DISCERNMENT –  And this is my prayer: that your love may abound more and more in knowledge and depth of insight, so that you may be able to discern what is best and may be pure and blameless for the day of Christ (Philippians 1:9-10).

We live in a time when the 24/7 news cycle offers us trinkets and shiny things, when humans are objectified, commodified, sexualized, in pursuit of sales numbers for shareholders. It’s a time when individualism trumps the common good, when fear trumps courage, and when the pressures of cultural conformity to one’s tribe are so immense that independent thought and thoughtful dialogue among parties that disagree, have all but vanished. Those with the kind of discernment for which Paul prayed are able to rise above all this. They’re neither swayed by social justice merely because it’s fashionable, nor by hardline pietism simply because some preacher or politician they voted for peddles it. They are hungry, not for images, but reality. They don’t make snap judgements and jump on bandwagons, as people did during the trial of Christ (allowing themselves, in a herd mentality, to be persuaded to release a known murderer in order to assure that Christ would be killed). Instead they wait, allowing truth to germinate and ripen. They live what Tolkien declared:

“All that is gold does not glitter – not all who wander are lost.”

I attended the church I now lead (Bethany Community Church in Seattle) when I was a college student. In 1978, after Jim Jones seduced more than 900 people to participate in a mass-suicide, one of the pastors led a Sunday School class and the topic was discernment.  We discussed how such an insane thing could happen, how people could be seduced by a smooth-talking charismatic leader, and how a mark of spiritual maturity was a discernment that transcended denomination, party, nation, or any other so called “loyalty.” We need this value today, more than ever, because people are increasingly isolating themselves in echo chambers of people who think like them, vote like them, believe like them, and practice faith like them.

It’s those closed off echo chambers that will suck all the spiritual and emotional oxygen out of the air, causing people to choke on their own self-referential, yet stylish, beliefs.  Discernment opens the windows and lets us breathe.

2. GRACE – I’d grown up basically believing that God was deeply angry at all of humanity but that He’d taken all that anger and poured it out on Christ so that we could get a ticket to heaven. Now, having our ticket, it was up to us to perform well so that we didn’t make God mad again.  This view of faith led to a great deal of fear (have I prayed enough, done enough, been good enough?), hiding  (I surely don’t want anyone to know that about my anger, lust, or fear), and hypocrisy (“I’m just fine thanks,” I’d say in spite of my inner turmoil, self-loathing, and intellectual doubts about the faith). Thankfully, I was introduced to the concept of grace when I began attending Bethany during college and they were reading a book called “Free for the Taking.” (I think it’s now a rare book based on this Amazon price!)

Embracing the notion that God is FOR all people, that God LOVES all people, and that salvation is less about quenching God’s anger than it is helping us discover God’s infinite love – these were truths that liberated me to love God, walk with God, and rest in the confidence that God would never leave me, no matter how hard I fell.  Some people are afraid that this kind of high octane grace leads to lawlessness, but, at least in my life, it led to the opposite. I fell in love with Jesus, and He became my best friend, the one to whom I would always run when down.

I’m watching people be publicly “executed” these days for their behavior forty years ago, in spite of a track record of deeds that shout, “I’ve changed! I’m no longer that person!” We need grace, and second chances, for repentant people, because God’s justice is always intended to be restorative, as revealed in the Garden of Eden, where God chases humanity down, and offers the promise of restoration. What if repentance led to grace? Our world would be filled with confession and movement towards right living! This is a value we desperately need today.

3. UNITY – The last thing Jesus prayed for prior to His arrest and execution was the visible unity of all believers. What did we do with that prayer?

Again, as a college student, I was overwhelmed with gratitude when I walked into Bethany Community Church and saw this sign:

I’d grown up in an environment where churches were splitting over the issue of divorce, and issues related to women in ministry and who ought to be the head of the house, not to mention divisions over speaking in tongues and whether or not someone could lose their salvation. I knew people on both sides of each of these issues, good people who loved Christ. And yet, these people where shooting each other with doctrine cannons and Bible grenades. I was sick of it.

What a joy to find a church who, at least aspirationally, desired to maintain unity in spite of some differences, because, after all, “if we all love Jesus, can’t we unite around that?” To this day I believe that the answer is a resounding YES! 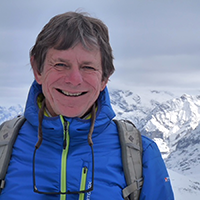 JOIN RICHARD THIS SUMMER AT FAMILY CAMP - GET ALL THE DETAILS.

« Every Gift Matters View All Fix Your Roof »