We are a mask-friendly campus. Learn what that means for you.
Stay Connected
Sandy Cove Blog
5 years ago

The Power of a Planned Gift

Last month I was on the edge of my seat as our founder's grandson, Paul Palmer, Jr., told me how the Chesapeake Lodge came to be — it's a story only God could write!


It was the mid-1980s, and Sandy Cove, as rich in faith as it had ever been, was preparing for one of its most ambitious projects to date: the creation of a retreat and conference center that could serve individuals, groups, and families year-round. There was only one small hurdle, and that was how to pay for it. The vision was there, but the money wasn't. Until Paul's uncle, Bob Palmer, got a phone call.


A dear friend of the ministry had passed away and left his estate to Sandy Cove. A modest man, there was no indication that the proceeds from the sale of his home and belongings would become a river of generosity that would ultimately set the stage for the Chesapeake Lodge to be built. But God knew. He knew that the prayers of hundreds of people would be answered through one man's bequest.


A planned gift — given by someone who wanted his legacy to include meeting the spiritual needs of future generations — became the seed money God would use to continue His work at Sandy Cove. And there are thousands of us who have been blessed, encouraged, even transformed as a result.


The commitment and foresight of one individual, coupled with the sustaining grace of a God who provides, can make a lasting difference in the lives of others! Whether it's an individual in search of rest, a group in search of inspiration, a family in search of connection, or a camper in search of encouragement, your planned gift can help us create an environment where all these things — and much more — can be found.


If you have already looked to the future and included Sandy Cove Ministries in your estate plan, would you let us know that you have taken this step? We want to thank you and welcome you as a member of Palmer Legacy Society. If you haven't, would you prayerfully consider including Sandy Cove in your will or living trust? Your legacy gift will help future generations experience the hope-filled message that Jesus Never Fails. And who knows, it may be what God uses to catalyze the next building project here at Sandy Cove. 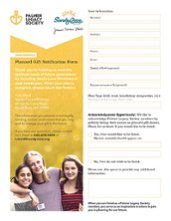