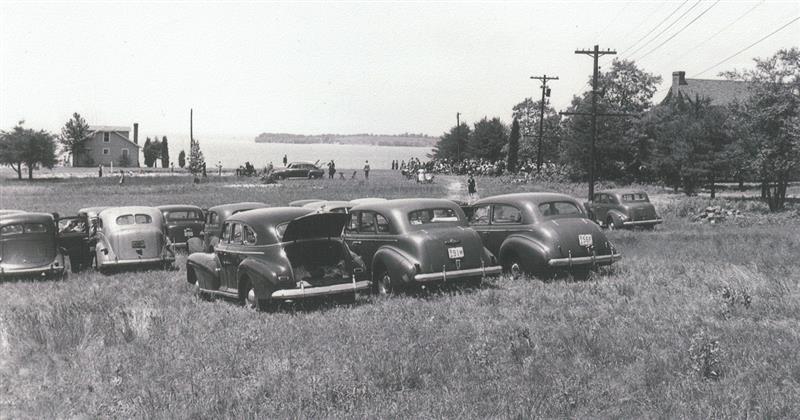 Let George Do It!

Dr. George Palmer left a legacy of faith that has touched thousands of lives over the past 75 years. His vision and tenacity were captured in an unfinished biography written by Norma O. Bailey titled Let George Do It! We’re excited to share this pivotal chapter about the opening of Sandy Cove in May 1946.

As the days passed George puzzled and prayed concerning the possible location for his new venture. Several times he took the family out to check various places he had in mind, but found no real peace about any of the spots they visited.

Finally, one day George, Jr. chided his father, "Dad, you've taken us everywhere but to that place down in Maryland. How about going down to look it over?"

George thought this was a good suggestion. He got Rachel and the three younger boys. George, Jr. brought along his young fiancée, Carol Sue Wheeler. Together they all headed for Chesapeake Bay country.

Even though it was a short trip it seemed like they would never get there. But pretty soon they turned onto a little narrow dirt road leading into the property which was located right on the river. As they passed through a heavily wooded area saturated with dogwood, laurel, oak, and sweet gum trees, the boys got more and more excited. Then a big clearing emerged behind a stand of Virginia pines. Ten little cabins and a huge rustic lodge nestled cozily among the trees overlooking a glistening body of water which was swarming with canvasback ducks. The boys were awed by the physical beauty. George, Jr.  had visions of himself racing across the shiny water in his sailboat. Paul, Bob, and Jack ran in and out surveying every inch of the property.

After a while, George, Jr.  turned to his dad and said, "This has got to be it!" The whole family heartedly agreed. There was no doubt in anyone's mind, including George's. "You're right, son," he nodded. "This is the place!"

So, the necessary arrangements were made and within days, Morning Cheer Inc. was the new deed holder of a wooded property, slightly in excess of two hundred acres, called Sandy Cove. It was located in beautiful Elk Neck just below the little town of North East, Maryland.

Thus with complete confidence he busied himself efficiently organizing his family and staff to prepare for Summer 1946. He had progressed from the tent meetings to "The Gables" to Montrose and now on to Morning Cheer's very own summer-long Bible conference.

He had every intention of making it surpass all of the others. There would be no halfway measures.  He would have the "best of food and plenty of it.” Facilities would be spotlessly clean and the grounds would be tediously manicured. His array of Bible teachers would rate par excellence.

Memorial Day weekend arrived. Eighteen buses were lined up to transport Philadelphians to Sandy Cove. The official kick-off weekend was typical Morning Cheer. Even the weather cooperated. People turned up from everywhere to support George Palmer. All were eager to share in his newest undertaking.

Sandy Cove was its own best advertisement for future success. One thing was for sure...if Morning Cheer's reputation for going first-class was not already on the top shelf of everyone's thinking, a short stay at Sandy Cove quickly placed it there.

« 4 Ways To Promote Your Event & Create A Waiting List View All Recruiting Your Retreat Team: Who to Look for and What to Ask »