Barking At The TV - Sandy Cove Ministries
We are a mask-friendly campus. Learn what that means for you.
Connect Now
Sandy Cove Blog 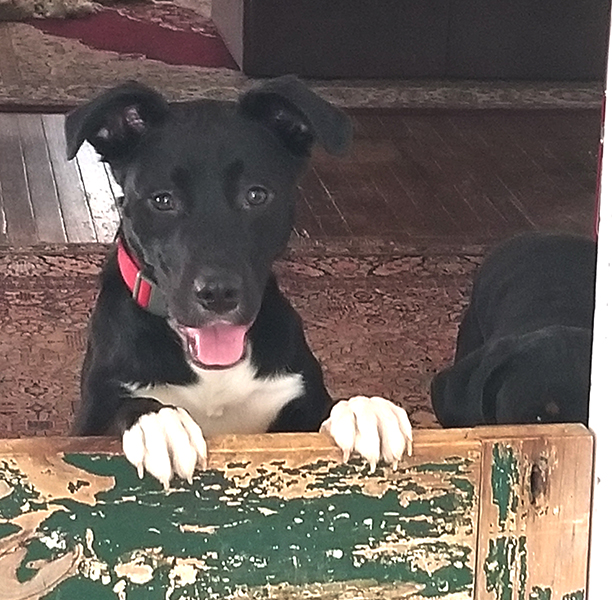 Barking At The TV

I have created a monster. A furry, four legged, spitting, sweaty-pawed monster.

A little over a year ago I brought Dash home from the Brandywine SPCA, to join our family. We already had a black Lab named Edith as our large main dog, and a Doberman called Kronk for an (even larger) backup dog. Then Dash came on board as our emergency auxiliary dog, and his energy and relentlessness quickly moved him toward the top of the pecking order.

Besides his Energizer Bunny approach to life, Dash is the most alert and curious dog I have ever known. He pays attention to everything, even things that Edith and Kronk care nothing about, including the television. When we watched TV, so would Dash, especially perking up when wildlife made an appearance.

Then the dog show came on, and I thought it would be funny for Dash to see some of his close relatives on screen. It was funny. And very, very loud. To say that Dash barked at the TV is like saying Bach wrote a few songs. So much barking. 100% intense, with sweaty paws and flecks of dog spit on the screen to show for it.

Since then it does not take a dog show to get Dash going – lots of things on TV will work, but he seems especially passionate about insurance. Talking raccoons, the Geico gecko and that Mayhem dude from Allstate deserve a diatribe. Animal the drummer, ET, and so much more will get a rise out of him. He will actually settle down during a football game, but he instantly recognizes bumper music and knows the commercials are his time to shine!

I’m pretty sure he thinks of the TV as a window – that all the things he sees are real, because he will occasionally jump off the bed and scoot through the door into the bathroom, to look for Sgt. Terry Jeffords, the Grinch, a Budweiser Clydesdale, or whatever has him worked up at that moment.

And as crazy as it makes me trying to watch TV with Dash, I have to realize that sometimes I am just like him. I bark at things that are not real. And I’m not just talking about yelling at the TV when the Orioles pitcher gives up another walk off homer. There are so many chances to get worked up over things advertisers are trying to sell me, messages that politicians are using to spin me, and opinions I disagree with on social media. I start to think those are reality, and I get agitated. My response gets sharper, and my paws get sweaty. (At least metaphorically)

I need to turn off the TV, close the browser, ignore the ads and turn my attention toward things that are real. Getting out into nature helps me. Connecting with people does too. (Ever notice how TV barking tends to drive people away? Unless the basis of your relationship is barking…then everyone gets a headache.)

Are you with me? What non-real things do you find yourself barking at?

And, if you need a place surrounded by nature, without TV’s in the rooms, I know somewhere.

Come to a bark free zone for a getaway or even a family vacation. Your paws will feel so much better!

Nate Ransil
Nate joined the Program department at Sandy Cove in 2003, and transitioned to director of that team in 2014. Nate graduated from Houghton College with a double major in Communication and Outdoor Recreation (yes, it is a thing) and got to know his wife Evelyn while co-leading backpacking trips for at-risk youth. Hopefully not as at-risk are their two sons, Caleb and TJ, who have spent all their summers at Sandy Cove, Camp Sandy Cove, and The MARSH! Nate enjoys being outside, being inside, being handy, the beach, snowboarding, roller coasters, training aardvarks, bodybuilding, contributing to quantum theory, and making up fanciful, if not entirely accurate, biographical details.