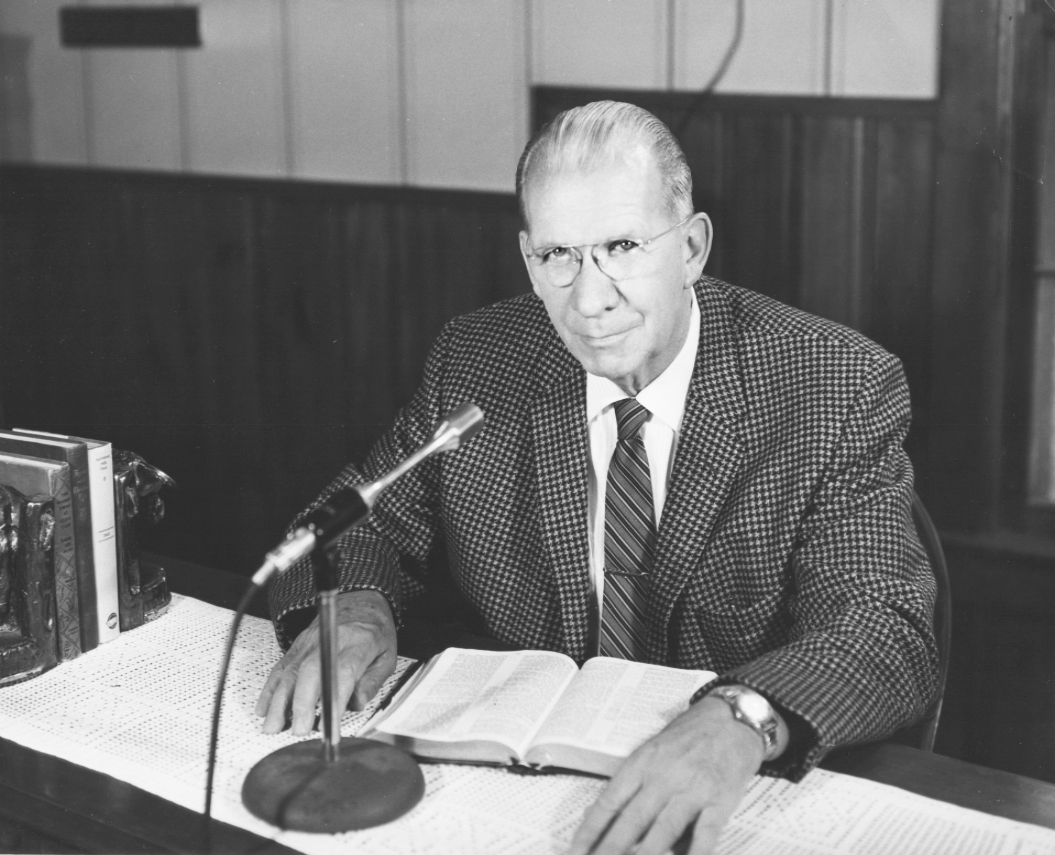 2022 marks 90 years since Dr. George A. Palmer was presented with a pioneering opportunity to reach thousands of radio listeners. His Morning Cheer radio broadcast spanned a half-century and was the longest running Christian daily broadcast in America.

The year was 1932 and amidst the backdrop of the Great Depression, Dr. Palmer took to the microphone from 7- 8 a.m. and delighted listeners with a small sermon, prayer, and music. Herbert Hoover was President, and Bing Crosby just happened to be making his own radio debut. But across the nation, people struggled, banks failed, and jobs dried up. Listeners were drawn to the Morning Cheer radio broadcast and its hope-filled message that Jesus Never Fails.

“Ninety years later, we’re still current and relevant to meet the needs of the people, and that’s part of our foundation,” says Paul Palmer Jr., Dr. Palmer’s grandson and current Board Chair at Sandy Cove.

Paul refers to his grandfather as the Mark Zuckerberg of his era. His passion for making friends and connecting people helped the New Jersey-based pastor launch a staggering array of ministries. His efforts to address real needs at home and across the world spanned two decades. The list of Morning Cheer’s ministries includes an orphanage in India, a seminary in Japan, and a hospital in Ecuador. Closer to home, Morning Cheer, Inc. operated two service centers that ministered to soldiers preparing for deployment during WW II in the early 1940s. There was also the Morning Cheer Bookstore in downtown Philadelphia, and later, a number of overnight youth camps in Maryland, Pennsylvania, and West Virginia.

For a young pastor so accustomed to a patchwork schedule of preaching in front of different church congregations or at nearby manufacturing warehouses during the lunch hour, this rise in popularity was unexpected. He even evangelized from street corners in Philadelphia and the ferry that ran from Philadelphia to Camden, where he joked he had a captive audience. Dr. Palmer’s radio presence paved the way for many appearances and speaking engagements at home and abroad.

“All those international touchpoints came out of the radio broadcast. It was a source of encouragement and stability in people’s lives – they grew up listening to the radio every day” says Paul.

When the war ended, Dr. Palmer began a search for property to establish his own summer Bible Conference. In 1946, he purchased property along the North East River and founded Sandy Cove Ministries. Even into his 70s, he recorded his daily broadcast at a small studio at Sandy Cove. The history of Morning Cheer is a surprise to many who thought that Sandy Cove Ministries was Dr. Palmer’s first or boldest entry into evangelism. In truth, Sandy Cove was just one more outgrowth of Dr. Palmer’s vision for the Morning Cheer, Inc. umbrella – one more way he could reach people for Christ.

“It was unwavering faith that was planted 90 years ago — from what I was told and observed — that enables us to be here today,” says Paul. “The foundation was built on Christ and not on man, and so even in dark times, the hope of Christ was and continues to be the foundation of all we do.”

As Dr. Palmer wrote in a leaflet commemorating the 25th anniversary of Morning Cheer: “As I look back over my life from that February day in 1915 when I accepted Jesus Christ as my personal Savior, until today, I am constrained to exclaim, ‘Great is Thy faithfulness.’ What wonderful things God has wrought!’”

« Provisions of Generosity View All The Marriage Check-In »